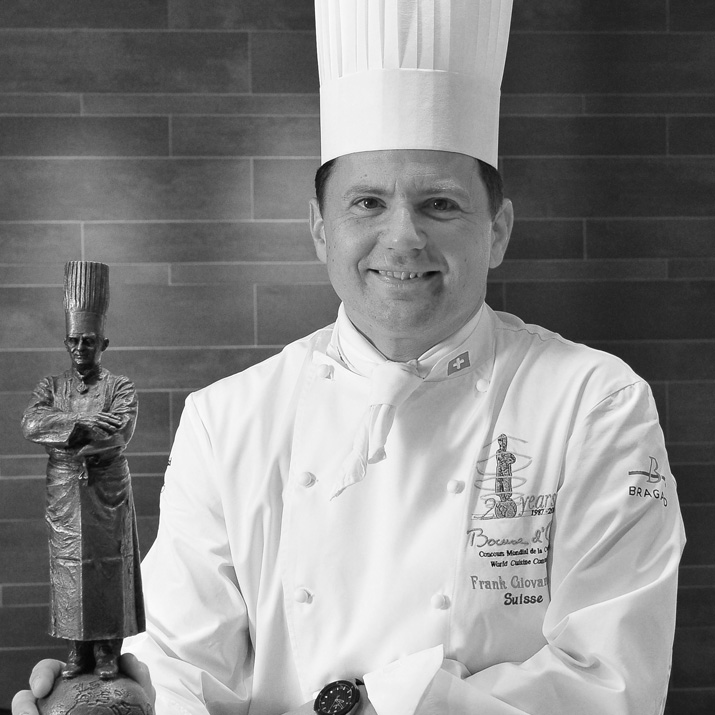 At the beginning of 2016, Franck Giovannini took over the gastronomic direction of the Restaurant B. Violier, headed by Brigitte Violier. Thus, Franck Giovannini is not only the chef de cuisine, but he also bears responsibility for the more than twenty highly qualified, experienced members of the kitchen team, all of whom he knows very well. Working with Benoît Violier, with whom he had a longstanding friendship, he achieved culinary peak performances for many years in Crissier. Today, he creates the restaurant’s menus according to the changing seasons, and thus builds on the outstanding work of Frédy Girardet, Philippe Rochat and Benoît Violier. Franck Giovannini’s professional career is impressive: he finished his cookery apprenticeship in 1992 with Claude Joseph at the Auberge de la Couronne in Apples. Once the certificate of competence was obtained, he left for Vancouver, where he worked in the sector of gourmet catering. Then followed an apprenticeship period with star-chef Grey Kunz in New York.

After a stop at the Restaurant de l’Hôtel de Ville as chef de partie under Frédy Girardet, Franck Giovannini went to Boston, before returning to Crissier in 2000. At that time, the Restaurant de l’Hôtel de Ville was headed by Philippe Rochat. This is where Franck Giovannini met up again with his friend Benoît Violier, who obtained him for the position of sous-chef. When Benoît Violier took over the restaurant from Philippe Rochat in 2012, Franck Giovannini succeeded him as chef de cuisine. The 42-year-old very much enjoys participating in cooking competitions – a passion that he shares with his kitchen team. He has already won the Bocuse d’Or Switzerland twice, came third at the Bocuse de Bronze in 2007, and in 2011 he was distinguished in Lyon in the final round of the ‘Prix du Poisson’. Today, Franck Giovannini is the president of the Swiss Bocuse d’Or Academy.