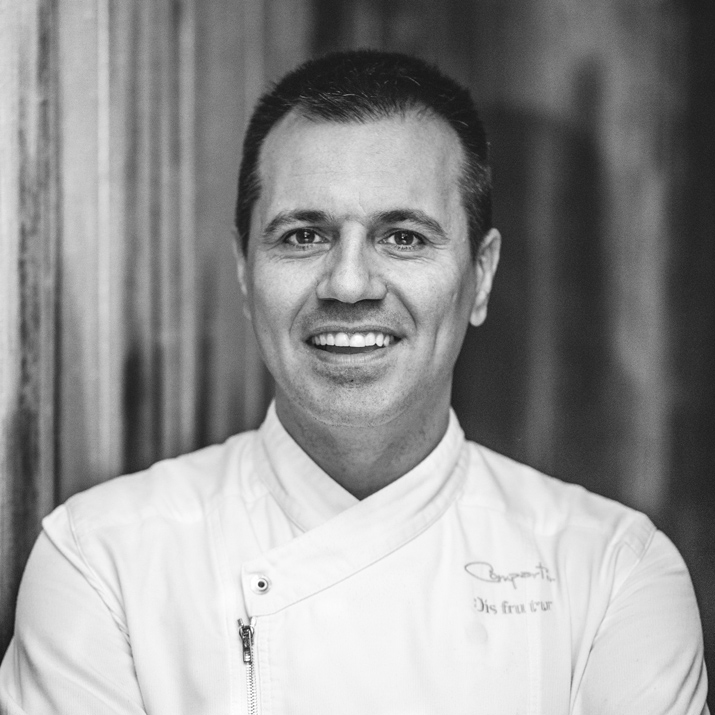 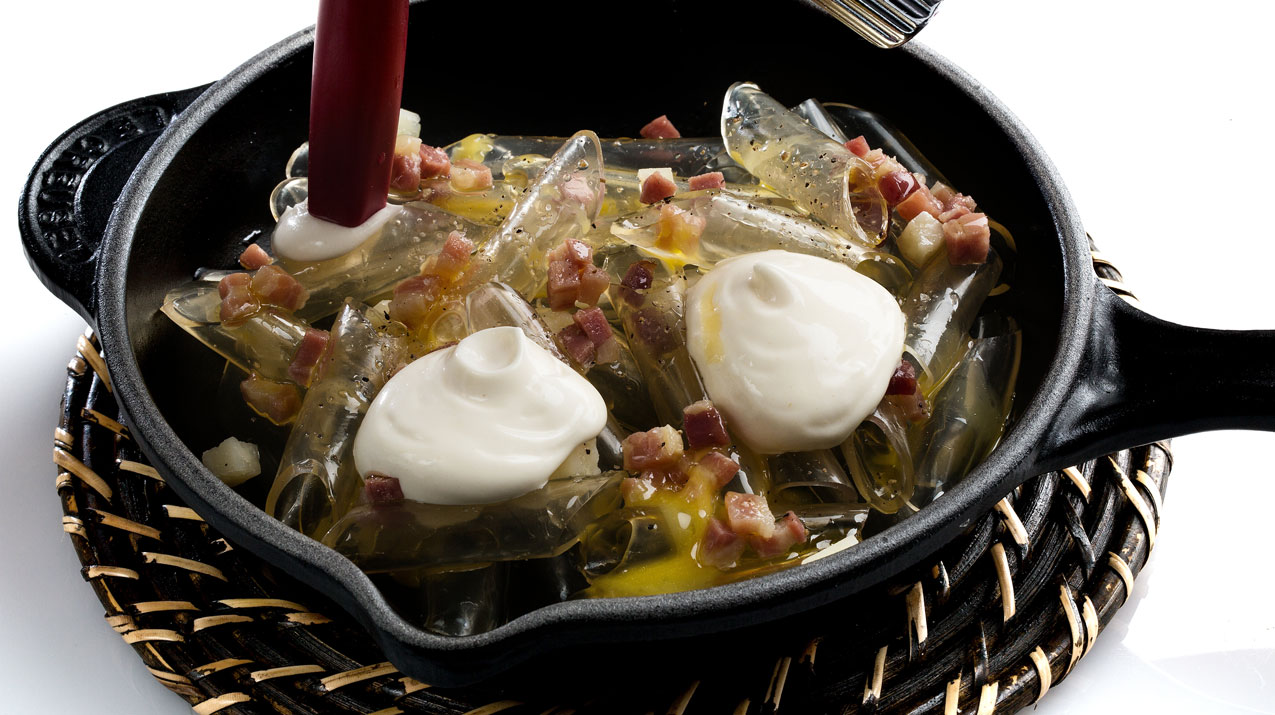 The Disfrutar (English = to enjoy), which opened in 2014 in Barcelona, is the second joint restaurant venture for Oriol Castro and his partners Eduard Xatruch and Mateu Casañas. Guests and restaurant critics alike were equally enthusiastic. A Michelin star and two Repsol suns were immediately followed by the award of ‘Restaurant of the Year’. In 2016, the Disfrutar received acclaim as the ‘Best New European Restaurant’. Three years earlier, Oriol Castro and his two business associates had made a successful start with their restaurant Compartir in Cadaqués.

No wonder that the trio functions perfectly: for 15 years, they had previously worked side by side as chefs de cuisine at the elBulli, and were part of the creative team until the closure of the restaurant. In fact, Ferran Adrià’s great mind unmistakably lives on. In Oriol Castro’s avant-garde dishes, olives crack like raw eggs: what is presented to the bare eye as a normal olive, turns out as a thin-shelled cocoon of pure delight, a taste explosion par excellence.

Limitless creativity together with surreal-seeming preparation methods that exhaust every possibility until attaining the ultimate taste, distinguish the ‘Castro-nomy’ concept. The special tasting menu at the Disfrutar consists of an average of 27 courses. Under new premises with an interplay of distinct Mediterranean aromas, it is a fascinating and independent further development of the formative elBulli style: a huge culinary show, dish after dish.

Born in 1974 in picturesque Sitges near Barcelona, Oriol Castro won his first prize after his cooking training in 1995, on the occasion of the Spanish confectionary championship. In 1996, after several internships in some of Spain’s leading restaurants, he began an apprenticeship in patisserie at the world-famous elBulli restaurant, where he quickly worked his way up to a head cook position. In 1998, he became part of the creative team that worked out during the winter months the recipes for the next season in the restaurant’s own kitchen workshop.

‘We adopt an audacious, entertaining and modern gastronomy, with the research of taste at its core’, is how Oriol Castro describes the current philosophy at the Disfrutar. Part of the concept is the open restaurant kitchen that provides a view of the centrepiece of the ingenious avant-garde chef trio Castro-Xatruch-Casañas.

Oriol Castro met his two business associates in the elBulli kitchen. In 2012, after the closure of the star-crowned restaurant, the three creative minds decided to become business partners. That is how in April of the same year, they opened the Compartir restaurant. Two years later followed the opening of the Disfrutar restaurant in Catalonia’s capital, Barcelona. At the end of 2015, when the restaurant celebrated its first anniversary, the Disfrutar received its first Michelin star and was distinguished with two suns in the Repsol Guide. Furthermore, the Catalonian academy for gastronomy and nutrition honoured the Disfrutar in 2015 with the title ‘Restaurant of the year’. And recently this has been followed with the title ‘Best New European Restaurant’ by the Opinionated About Dining guide.