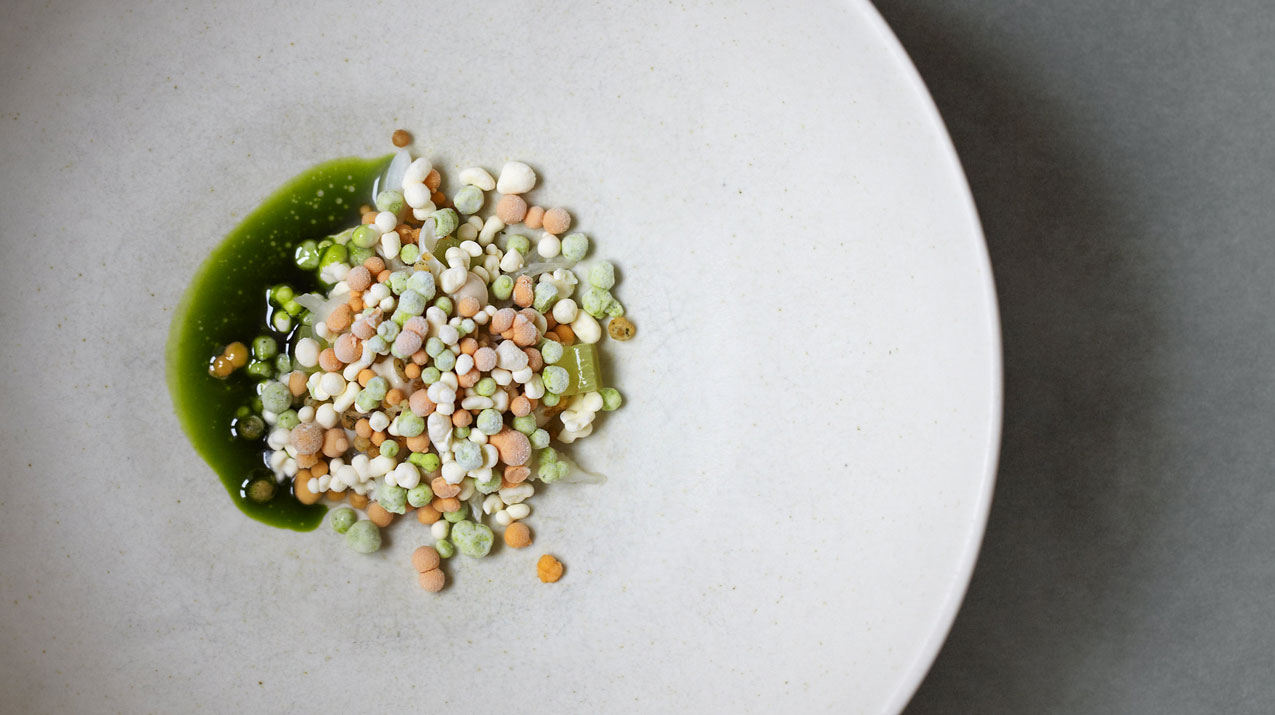 Even Ramsvik would have certainly gone as far as an author or film director, as he did as a cook. As with a film or a work of fiction, it is the chefs’ intention to create a perfect whole in every respect. He does it in the form of a menu that boasts dramatic compositions by which the guest is captivated to the epilog, the cheese and the dessert. The star chef achieves his claim of constantly maintaining interest in the menu at a high level, by an ingenious combination of the aromas. It would have been easy to obtain this by adding countless Umami aromas. However, Even Ramsvik puts great emphasis on the right techniques that enable the aromas to develop completely and within their whole range. It’s precisely these techniques through which the exceptional cook found the Norwegian identity in his kitchen. Norway’s climate-related circumstances only allow fresh products to be picked for three to four months. That is why techniques that had been used for generations in Norway, like salting, pickling, smoking, fermenting, drying and marinating, become even more important. ‘It would have been wrong to simply implement the Nordic trend like in many other restaurants. That would not have been truly Norwegian for me’, says Even Ramsvik.

The Norwegian identity is to be found especially in the use of traditional techniques of preservation, because it enables an aroma profile with powerful and robust tastes. The best example is Even Ramsvik’s signature dessert with apple. Always with the goal in view of clearly defining interesting aromas from the ingredients, the apple is roasted over an open fire until the peel is blackened and the caramelization process has begun, before the apple is entirely cooked. After four days of dehydration, he obtains a powerful, intensely acid apple whose peel he marinates in apple juice, and with the flesh he prepares a compote.

At the YLAJALI restaurant, where Even Ramsvik earned a Michelin star and that he ran until 2016, the menu consisting of 19 to 20 dishes was announced to the guests in a little book with the title ‘YLAJALI’, to be found on the tables. In fact, the dramaturgy at the restaurant started much earlier than on the first plate. The name of the restaurants goes back to the work of fiction of the same name, written by the Norwegian winner of the Nobel Prize for literature Knut Hamsun, and it means ‘hunger’ in English.

Even Ramsvik’s latest project bears the name ‘Lava Oslo’. It is a newly founded restaurant group with four chefs de cuisine, whose objective is to be part of Norway’s constantly developing restaurant and food scene and to support restaurant culture. Even Ramsviks’ cooking philosophy is also perceptible in the ‘Lava Oslo’: the restaurant group thrives on sustainable concepts – for the products as much as for the management of the restaurants. Furthermore, plans already exist for a ‘YLAJALI 2.0’.

Even Ramsvik’s career indicates his deep roots with his home country. Apart from the formative time with three-star chef Régis Marcon in France, the native Norwegian made almost no international stops, and took over the lead of the YLAJALI restaurant in 2010, when he was only 27 years old, after having been at the head, as co-owner and chef de cuisine, of the star-crowned Oscarsgate restaurant in Oslo.