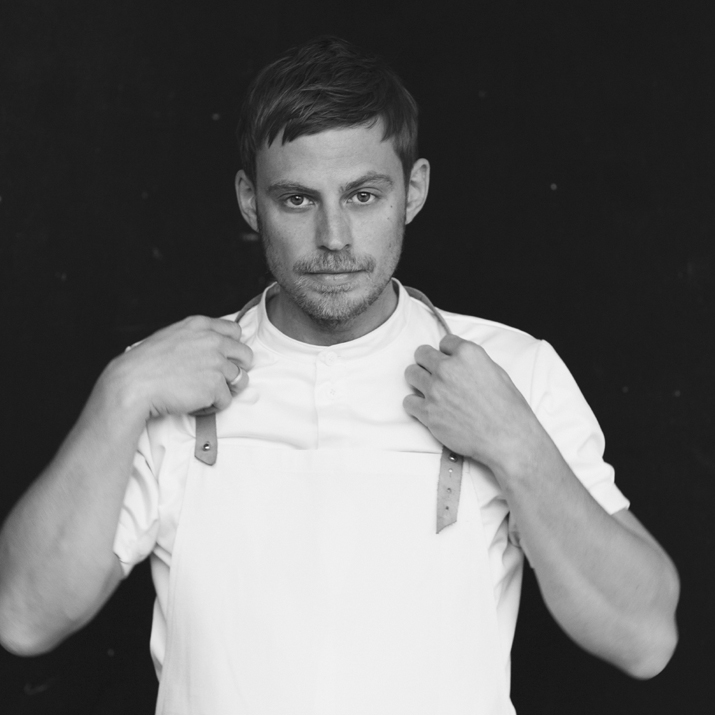 Nicolai Nørregaard ranks as an early proponent of the Nordic Cuisine movement. The 38-year old Dane was born on the island of Bornholm. The harsh island, 180km off the Danish coast, is situated in the middle of the Baltic Sea, yet at the same time is the larder for his cuisine. For example, on the menu of his restaurant Kadeau - Finnish for “showing respect” - one can find smoked fish, fried lichen, juniper biscuits and flower blossoms, as well as cockles with fermented wheat and urchins or celeriac with caviar, red wood ants and woodruff. The wealth of meat, fish, berries, vegetables, herbs and mushrooms from the island appears incredible at first sight. On the other hand, the season to harvest is short and the winter very tough on the island of Bornholm. Necessity is the mother of invention. Whenever and wherever nature offers its treasures, Nicolai Nørregaard harvests them to the full and preserves them. On the restaurant’s shelves, pickled and fermented treasures from the island are lined up in an impressive number of receptacles. Pickling, drying, brining, curing and reducing to jus - Nicolai Nørregaard perfectly masters all the techniques and this is how, even in winter, the most varied tastes and aromas from his homeland unfold in his dishes: skilfully and surprisingly combined with one another in salty, crispy, sour and sweet elements. “We plough, tend, harvest, pick, conserve, serve and love Bornholm”, says Nicolai Nørregaard in explaining his island’s holistic culinary concept. Its beginnings were provided by the original restaurant Kadeau on the island of Bornholm, the only neighbours of which to this day are the forest, the coast, the beach, the sea and the sky.

Nicolai Nørregaard opened the restaurant in 2007 together with his friend, sommelier Rasmus Kofoed, who also grew up on the island. In 2011, Magnus Kofoed, joined them as another partner and the trio dared to undertake the step of opening Kadeau in the capital Copenhagen, where his cookery skills were immediately awarded a Michelin star, in 2018 the second star followed. In 2016, the exceptional, self-taught talent earned another star for his Kadeau restaurant in Bornholm. Nicolai Nørregaard never had a classical apprenticeship but flirted with architectural studies or attending a design and art school, before devoting himself to Nordic Cuisine and creating his unique gastronomic style.

In November 2017, the Copenhagen Kadeau moved to a somewhat smaller outlet in the immediate vicinity. In this more intimate setting, offering a cosy, homely atmosphere, Nicolai and his young team now create a seasonally varying, 20-course tasting menu in their open kitchen, artistically presented on plates for a mere 24 guests instead of the previous number of 72. Homemade Bornholm juices round off the culinary experience that smacks of a meal in the home of good friends. Nicolai Nørregaard explains it this way: “The backbone of our cuisine is the nature of Bornholm - wild as well as cultivated. We care for tradition yet strive to innovate. We are ambitious and thorough but will always be playful and explore the new. Our cuisine is regional, yet we are inspired by the whole world. We follow the rhythm of the years and the cycle of the seasons”.

Together with his two partners, Nicolai Nørregaard constantly explores new gastronomic worlds. He is also a co-owner of the PONY Restaurant in Copenhagen’s shopping mile Vesterbrogade, and a hotel on the island of Bornholm called Nordlandet, where he opens the Summer PONY during the summer months as a pop-up restaurant. What’s more, he is co-owner of a Bornholm-based juice factory. Therefore, the Kadeau is much more than a restaurant: it’s a love affair with that special piece of nature and a friendship-based company. It’s local food loving patriots are fighting for jobs on Bornholm and recognition of their place of origin.